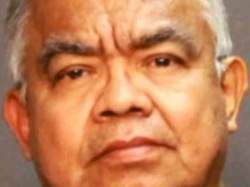 The defendant’s wife, Maria Esther Hernandez, 61, Santa Ana, pleaded guilty to one felony count of being an accessory after the fact or having knowledge of a crime. She was sentenced on May 31, 2013, to three months in jail, three years of formal probation, and was ordered to pay restitution (Case # 13CF0803).

At the time of the crimes, Felipe Hernandez and Maria Hernandez held positions of trust over the victims. All of the acts occurred in the defendants’ home.

The defendant threatened Jane Doe 2 that he would not provide her with any money and other privileges if she did not comply with his sexual demands and threatened to take away Jane Doe 2’s cell phone and laptop.

In the summer of 2012, a family member of the defendant discovered a memory card containing a video of the defendant touching Jane Doe 2 on her buttocks and anus and reported it to the Santa Ana Police Department, who investigated this case.

The father of one of the victims also delivered an impact statement at the sentencing about how this case has affected his family. He said in part, “It is hard to believe that people like this exist in the world.”