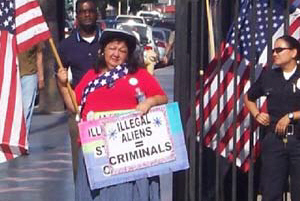 Here is what Nguyen had to say about Moreno and Stroud’s ballot designations:

The funny thing about the Republicans running for the OC GOP Central Committeein the 69th A.D. is how many of them are government workers!  OC GOP Chairman Scott Baugh regularly rails against public employee union members, but half of the candidates running for his party’s Central Committee in the 69th A.D. are government workers!  Moreno works on the Orange County Health Department and Stroud is a former Orange County Recreation Manager.  Other government workers running in this election include LAUSD asbestos inspector Thomas Gordon, and Orange County middle manager Charles Hart.  Moreno is the only Hispanic candidate, but she is a Minuteman who wants to deport Mexican immigrants.