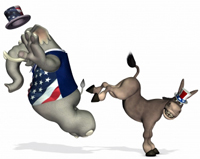 Take a look, for example, at voter registration in the First Supervisorial District, which includes all of Santa Ana.  There are 98,164 Democratic voters in the district, versus 76,738 Republican voters.  And there are only 1,306 Libertarian voters in the district.  The only other significant voter demographic is the 45,876 voters who have no party preference.

I have lived in Santa Ana now for over twenty years.  I was a Republican for most of my adult life.  In fact I was the only Latino elected to the OC GOP Central Committee in 2006, but by then the Republican Party had already gone overboard in their immigrant bashing.  Fed up, I quit and eventually registered as a Libertarian.

Understand that I was once the inaugural Hispanic Outreach Director for the OC GOP.  And I was darn good at it.  Now I will bring those skills and experiences to the Democratic Party of Orange County.

I also started Orange County’s first political blog, the Orange Juice.  It is still doing well under the leadership of its new Editor, Vern Nelson, one of the top progressive Democrats in the state.  And the New Santa Ana blog, which I started in 2009, is now the top political blog in Orange County, according to Alexa.com, the top web ranking service in the world.  Granted, the New Santa Ana’s coverage includes more than just politics.

I still by the way hold a lot of Libertarian views, but the reality is that the Libertarian Party cannot win many elections, particularly in Santa Ana.  And if you cannot win, you most certainly cannot get anything done.

I actually agree with the Democratic Party on just about all the social issues.  I remain disappointed that so many Democrats are immigrant bashers and extremists on issues like gambling and medical marijuana, but overall there are more civil Libertarians in the Democratic Party than in the Republican Party.

I am a member of the American Federation of Teachers and so I can appreciate organized labor.  I do however think that public employee’s unions have done us all a disservice with their early retirements and overly generous pensions.  As a Democrat I will push for reform of these pensions and recognition not only of unionized workers but all workers.

The O.C. Democrats are really in a bad spot right now – it is likely that redistricting will result in Republican voter advantages in the aforementioned First Supervisorial District, as well as the 69th Assembly District, the 34th State Senate District and the 47th Congressional District.

I cannot abide the thought of those districts going red again.  Not while the GOP continues to bash immigrants.  And so I registered today with the California Secretary of State as a Democrat.  And I am mailing my ballot to the O.C. Voter Registrar’s office tomorrow.