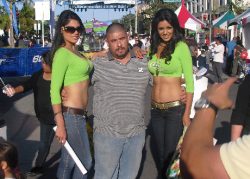 My fourteen year old son and I jumped on the OCTA Route 53 bus today and headed down to the 2011 Santa Ana Cinco de Mayo festival, which continues on Sunday, May 1.  The bus was packed with others who were headed to the event.

I have been to a lot of these events over the years, and knew what to expect – lots of food vendors, and a mix of big corporations marketing their services and street vendors hawking all sorts of goods, from clothing to toys.

This year’s event featured a “Beer Garden,” which is essentially a bunch of tables and chairs with umbrellas and cerveza.  We ran into the Bud Light Lime girls and they towered over the masses, as they passed out posters of their peers.

The band that was playing sounded good.  The music continued until late and will pick up again tomorrow, with headliner Ozomatli, a Grammy award winning band from Los Angeles.

My son got hungry so we bought a carne asada torta.  He loved it!  He also bought an horchata, a Mexican beverage made of rice and cinnamon.  I had a Tamarindo agua fresca beverage, which was flavored with the tamarind fruit.  It was excellent.

The attendance was a bit lighter than expected, but I am told that Sunday should be packed as many of Santa Ana’s working people have to work on Saturday, but are off on Sunday.

The only VIP I ran into was Councilwoman Michele Martinez, who was having a great time.  She will definitely be there on Sunday to watch Ozomatli.

Click here for details about the event, including tomorrow’s musical acts.

« May Day March in Santa Ana, on Sunday, at 10:30 am
Wreck Hall at Proof featuring live music by Reporter, on Sunday night »

4 thoughts on “My visit to the 2011 Santa Ana Cinco de Mayo festival – with pictures!”