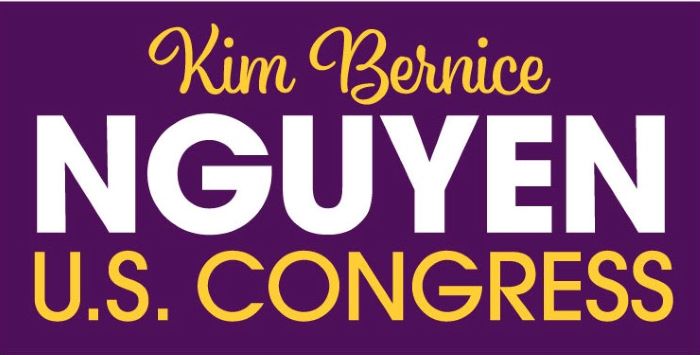 The incumbent in CA-45 is Michelle Steel, a Republican who is Korean-American.

The daughter of a Vietnamese refugee and a Mexican immigrant, Nguyen was the first in her family to graduate high school and college. At just 25, she won a historic election as the youngest person and first Latina ever elected to the Garden Grove City Council. A leader on women’s issues, Ms. Nguyen has stood up to harassment and sought equality and justice throughout Southern California and has fought to ensure that immigrants, like her parents, have the dignity and opportunity to succeed in our communities.

A homegrown leader, Ms. Nguyen attended Clinton-Medenhall Elementary, Doig Intermediate, and Santiago High School. As a healthcare expert, she will bring a much-needed public health background to Congress, having formerly worked for CalOptima and now as a Program Manager for a large health plan.

CA-45 is one of the top pickup opportunities for Democrats in 2024. It is a Biden +6 district with a Democratic registration advantage of 5.6%. Asian American Pacific Islander (AAPI) and Latino voters are a majority of the district at 51.6% – with Vietnamese voters making up the largest block of AAPI voters at 58.4%. If elected, Ms. Nguyen would be the first person of Vietnamese descent ever elected to Congress in California and only the third in US history. She would also be the first Asian-Latina in Congress and one of a growing group of millennials seeking to make change on our most crucial issues.