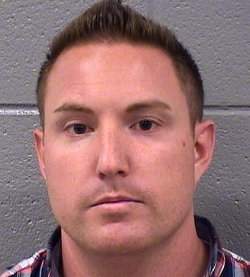 Between 2009 and 2013, Bonzer committed three separate crimes. A joint investigation was conducted by the Brea Police Department, California Department of Insurance (CDI) and the Orange County District Attorney’s Office.

On Aug. 4, 2009, Bonzer obtained his insurance license and was hired the next day by Farmers Insurance Group (FIG) as a reserve agent at a FIG branch in Brea. On July 31, 2010, Bonzer was terminated from FIG for failing their career program.

After Bonzer’s termination, FIG opened an investigation and found 128 homeowner’s policies which listed their mailing address as Bonzer’s office. No premium was ever collected by FIG on any of these 128 policies. The policies were validly issued but the named of those insured did not own the properties thereby making the policies fraudulent.

Bonzer was paid and received commission from FIG for $46,000 for all 128 fraudulent policies. Bonzer never returned his commissions on these policies. On Nov. 17, 2010, CDI received notice of Bonzer’s termination from FIG and began investigating this case.

In September 2011, CDI received information that a citizen’s name appeared on a FIG Memorandum of Fire Insurance for a property this citizen was never associated with. The FIG policy showed that it involved another FIG Agent.

None of the people in the 791 insurance policies owned the properties Bonzer listed, making them fraudulent. The Agent received full commission in the amount of $573,242 which was split with Bonzer on these properties even though no premium was paid to FIG for these fraudulent policies.

The FIG Agent repaid to Farmers Insurance Company his commission chargebacks of $333,489. Bonzer never returned his commissions on these policies.

In 2012, Bonzer created a fictitious insurance company by the name of GW Mutual Risk Retention Group, LLC (GW Mutual) which he registered in Florida. GW Mutual is not licensed by California to write insurance, nor to transaction business within the State of California. The defendant sold workers’ compensation and commercial insurance policies through his agency, Bonzer Insurance Brokerage, located in south Orange County.

Bonzer was questioned by a customer about GW Mutual’s ability to transact insurance in California. He provided the customer a fraudulent CDI Report of Examination as proof. The lack of coverage with a licensed insurance company places these businesses in a position of lifetime exposure to potential financial loss.