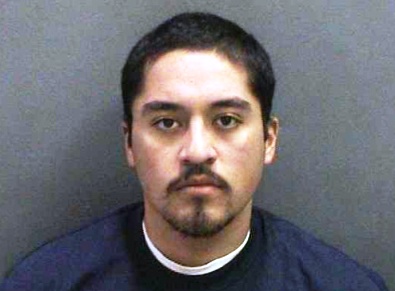 SANTA ANA – A gang member was sentenced today to 40 years to life in state prison for the unprovoked shooting-murder of an innocent man outside of a restaurant in Santa Ana. Ricardo Guerra Rocha, 19, Santa Ana, who was 17 years old at the time of the crime and charged as an adult, was found guilty by a jury June 27, 2012, of one felony count of murder, one felony count of street terrorism, and sentencing enhancements for the vicarious discharge of a firearm causing death by a gang member and criminal street gang activity.

Ricardo Rocha’s sister Maria Isabel Rocha, 30, Santa Ana, is charged (Case #11CF0494) with one felony count of murder with sentencing enhancements for the vicarious discharge of a firearm causing death by a gang member and criminal street gang activity. If convicted, she faces a maximum sentence of 50 years to life in state prison. Maria Rocha is scheduled for a pre-trial hearing Sept. 19, 2012, in Department C-5, Central Justice Center, Santa Ana.

Co-defendant Ivan Sanchez, 23, Santa Ana, (Case #11CF0465) is charged with one felony count of murder with a sentencing enhancement for the personal discharge of a firearm causing death. If convicted, he faces a maximum sentence of 50 years to life in state prison. Sanchez is scheduled for jury trial Sept. 18, 2012, in Department C-5, Central Justice Center, Santa Ana.

The following information was presented during the jury trial against Ricardo Rocha. Sanchez and Maria Rocha are accused of the following:

On the night of Feb. 13, 2011, Sanchez, Rocha, and Rocha, got into an argument with an unknown group of people at Mariscos La Ola restaurant in Santa Ana over which state in Mexico was better. The three defendants left the restaurant, drove to get a firearm, and returned to the parking lot several minutes later.

When the defendants arrived back at the restaurant, 35-year-old Esteban Navarrete was leaving and getting into his car with his wife and friend. He did not know the defendants. Maria Rocha waited in the car as the get-away driver while gang members Sanchez and Ricardo got out of the car and approached the victims’ vehicle. Navarrete, who is not associated with any criminal street gang, got out of his vehicle to explain that he and his passengers were not involved in the earlier argument. Sanchez murdered Navarrete by shooting him one time in the head. He fired several more shots, but the other victims were not hit.

The Santa Ana Police Department (SAPD) investigated this case. On Feb. 17, 2011, Sanchez was arrested after SAPD performed a traffic stop of a vehicle driven by now-22-year-old Manuel Toscano. Toscano attempted to drive Sanchez to Mexico to escape arrest and avoid punishment. Toscano has been charged (Case #11CF0464) with one felony count of accessory after the fact and faces a maximum sentence of three years in prison if convicted. Maria and Ricardo Rocha turned themselves in to SAPD on Feb. 18, 2011.

During the sentencing today, the victim’s wife, mother, and brother presented impact statements to the court describing the devastation of losing their best friend, husband, and son.