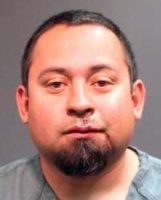 Martin Alonso Cea, a 33-year-old drunk homeless man, was arrested on Monday night after lighting vegetation on fire inside Santiago Park, according to the O.C. Register.

Cea, 33, was seen by two people around 8:10 p.m. inside the park at 2535 N. Main St. just before he intentionally started a brush fire near the creek bed, according to the SAPD.

Cea was seen bending down and doing something suspicious. Witnesses confronted Cea after they saw a flame erupt from a nearby brush. The suspect then became combative.

One of the witnesses then had to use force, which caused some moderate damage to Cea’s face, according to the SAPD. The witness, a male, held Cea down until the SAPD police officers arrived.

The approximately 30-foot-by-30-foot brush fire was put out by Orange County Fire Authority firefighters within about 10 minutes. The suspect was arrested on suspicion of arson.