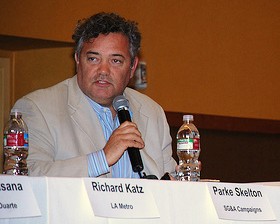 According to L.A. Observed, Skelton is the consultant most likely to lose sleep over going negative. He is known for left-wing politics and for picking candidate he wants to win. He is skilled at direct mail campaigning.

Skelton was a Hillary Clinton supporter last year, but he later switched to Barack Obama, according to the Huffington Post and this link.  He gave money to both candidates.  He previously contributed to John Kerry’s Presidential Campaign.

Skelton is also running Assemblyman Dave Jones campaign for State Insurance Commissioner, according to this link.