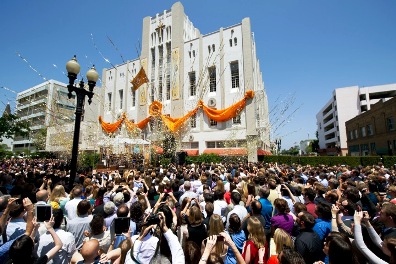 The Church’s new home, located at 505 North Sycamore Street, most recently served as the Santa Ana Performing Arts and Event Center. The 48,000 square foot building was originally constructed in 1931 as the Santa Ana Masonic Lodge. It remains one of Orange County’s finest examples of Art Deco architecture and is listed on the city, state and national registers of historic places. The Church of Scientology faithfully restored and preserved the structure, including its iconic facade anchored by a six-story central tower. The Church further returned the building’s ornate interiors to their former glory, from the alabaster chandeliers and hand-painted ceilings to the carved mahogany staircases. The landmark third-floor ballroom once again stands as a gathering place for the community, serving as the grand Chapel and auditorium venue for parishioners and people of all faiths in Orange County. 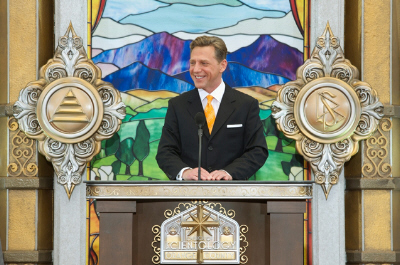 In emphasis of what this day signified for the community as a whole, Mr. David Miscavige, Chairman of the Board Religious Technology Center and Scientology’s ecclesiastical leader, dedicated the new Church. Mr. Miscavige addressed the gathering with these words: “We come to the first momentous page of this Church’s new history. Needless to say, it’s not a tide of history on which one merrily floats. On the contrary, it must be a history unlike any ever told before, a history of supreme competence, great passion and perfect adherence to our Technology. For only in that way will we ever achieve the Aims of Scientology and thus a world without war, without insanity, without criminality; a world of which we can be proud, where the able can prosper, where honest beings have rights and all are free to rise to greater heights. That is our responsibility as Scientologists—and, yes, it’s one that we proudly embrace.” 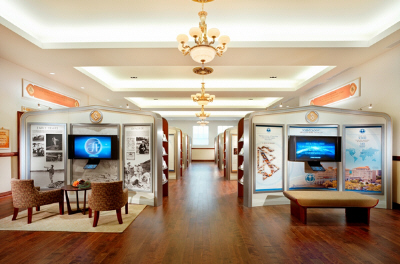 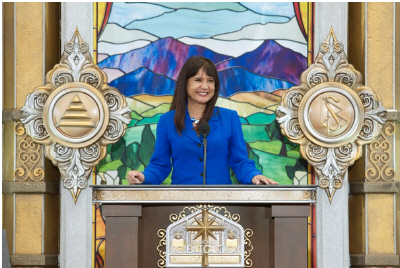 Anaheim City Council Member Lorri Galloway acknowledged the significance of this new Church of Scientology in light of its leadership in community partnerships: “It is wonderful that such a massive international church such as yours is making its home in such a beautiful venue and iconic building. It is a perfect partnership. Reaching out to the community is a trademark of yours.” 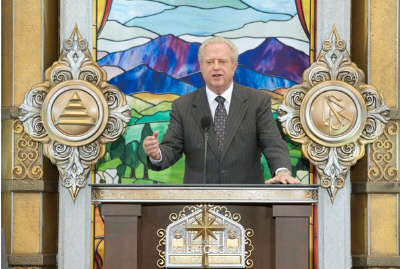 Garden Grove Mayor William Dalton spoke of the Church’s community education programs: “One of our greatest champions of education in California and the nation, Cesar Chavez, once said, ‘The end of all education should surely be service to others.’ You are all fantastic examples of Cesar Chavez’ ideals in action. Because you all put what you have learned, and what you know, right back into the community.” 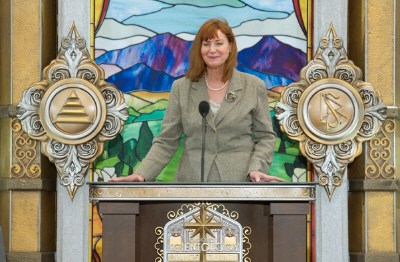 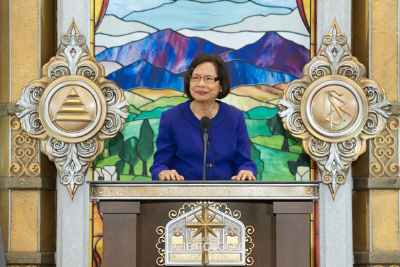 Orange County’s Faith in Youth Project Director of the Community Service Program, Ms. Lourdes Gutierrez, highlighted the Church’s drug education work: “I would like to congratulate you for doing so much to help us create healthy and safe communities in Orange County, and helping us to save lives. I look at this new Church as a place from which we will finally be able to work together on a much grander scale to save many more lives.” 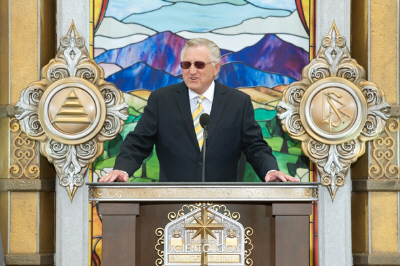 Orange County Interfaith Network Board Member Mike Penn spoke of the Church’s role in the interfaith community. “What better example of common spiritual understandings is there than this statement from your founder, L. Ron Hubbard: ‘Happiness and strength endure only in the absence of hate. To hate alone is the road to disaster. To love is the road to strength. To love in spite of all is the secret of greatness. And may very well be the greatest secret in this universe.’ When we realize your sacred scriptures say the same things mine do, we have these ‘ah ha’ moments, and our future is brighter with possibilities of greatness!”

This new Church opens its doors to provide Orange Country residents with an introduction to Dianetics and Scientology. Visitors are invited to take a self-guided tour of the expansive Public Information Center, presenting informational and documentary films on every aspect of the religion, including the life and legacy of Founder L. Ron Hubbard. The Information Center also offers a detailed overview of Church-sponsored humanitarian programs, including a worldwide human rights initiative; equally far-reaching drug education and rehabilitation programs; a global network of literacy and learning centers; and the Scientology Volunteer Minister program, comprising the world’s largest independent relief force. In full, the Center’s multimedia displays present more than 500 films, available at the touch of a button. The Center is open morning to night for visitors to tour at their leisure. 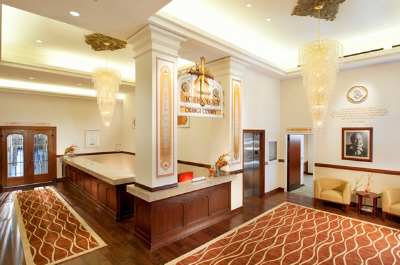 Orange County’s new Church further includes expansive facilities to provide Introductory Services to those new to the religion, including Dianetics and Scientology Personal Efficiency seminars and an array of Life Improvement Courses. The Church also provides dozens of rooms dedicated to the delivery of Scientology auditing (spiritual counseling).

Ideal Orgs realize the fulfillment of Founder L. Ron Hubbard’s vision for the religion. They not only provide the ideal facilities to service Scientologists on their ascent to greater states of spiritual awareness and freedom, but are also designed to serve as a home for the entire community and a meeting ground of cooperative effort to uplift citizens of all denominations.

The Scientology religion was founded by author and philosopher L. Ron Hubbard. The first Church of Scientology was formed in Los Angeles in 1954 and the religion has expanded to more than 10,000 Churches, Missions and affiliated groups, with millions of members in 167 countries.