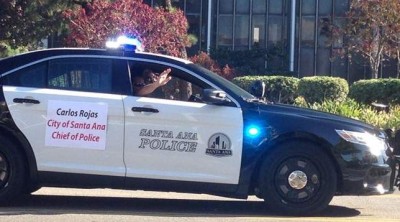 The Santa Ana Police Department has for decades leased cars for use by detectives for undercover assignments like the gang detail, narcotics and vice.

The detective staff relies on the use of the lease vehicles for their own safety and as necessary tools to be able to conduct investigations. This is the norm in almost every major department and state and federal police agency across the country that uses undercover police cars.

SAPD Police Chief Carlos Rojas’ detectives are really upset because Chief Rojas has taken the leased vehicles away from the undercover assignments and assigned them to his handpicked top staff – the Commanders and two Deputy Chiefs. This group is represented by the police management association. A labor group just like the Santa Ana Police Officers Association only it represents just the Commanders and Deputy Chiefs.

By the way, Rojas recently promoted one of the Management Association leaders and he is reportedly getting ready to promote another one next month. Just a coincidence?  We don’t think so!

Rojas cannot promote all of the Management Association members since there are only so many spots, but the inside word from those close to Rojas’ top staff is that he is trying to buy the loyalty of the Commanders and Deputy Chiefs by doling out SUV’s and other specialty undercover detective vehicles for their own personal use – at city expense. This was clearly not the intent of these vehicles! 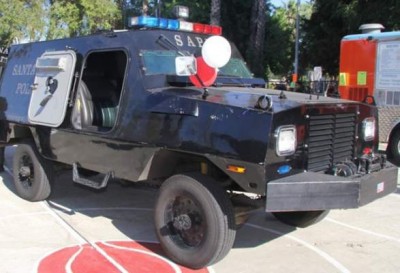 Of course one has to wonder if this is simply pay back to the same Police Management Association union leaders that supported Rojas and lobbied the city council for him to be their next Chief. Ever wonder why the testing process for police chief was never advertised to other chiefs of police in the state, let alone the country, and why there was no media coverage of any possible candidates? There were no other candidates!  It was all a ruse.

In fact the City Manager had to extend the closing date for applicants because no one applied for the job. You would think a national executive recruitment firm would be involved to get the best possible leader for this department, but not here in Santa Ana – the fix was in by the City Manager, who at the time was an overpaid temp charged with doing whatever the City Council majority told him to do.

What happened to Rojas’ ethics, did he forget he took an oath of office? His job is to give the support the men and women in his department and provide them with the tools they need to protect our city from the criminals. Those doing the job of risking their lives while arresting gangsters, drug dealers and violent offenders and who need specialized police equipment are being shortchanged by Rojas as he panders to his the command staff.

The commanders and top staff don’t work undercover assignment and they certainly don’t arrest violent gangsters, narcotic dealers and sex offenders. In fact if you check out some neighborhoods in Santa Ana you will find the gang activity, narcotics sales and prostitution problems are the most visible and most blatant they have been in over 20 years! 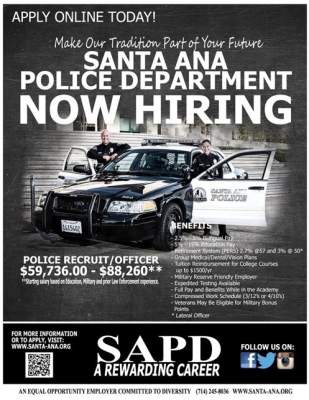 It is no wonder that highly experienced detectives and officers are retiring as soon as they can or are fleeing in huge numbers from the SAPD.  This is why the SAPD is running a full court press as they desperately try to hire new officers.  They have been running the ad above on Facebook and I ran into their recruiters this weekend at the Tustin Tiller Days carnival.

You have to wonder if Rojas’s days as Chief of the SAPD are numbered?  Even his strongest supporters are wondering what has happened to him. Is he crazy with power or is he just over his head and doesn’t know what to do?  More and more of the men and women in the SAPD now want to get rid of an inexperienced Police Chief who seemingly only cares about himself and nothing else.  In fact at the Mayor’s recent breakfast reception all the local neighborhood leaders wanted to talk about was how do we get Chief Walters to come back? You have to wonder if he would even consider coming back to this mess – and our truly awful City Council.

9 thoughts on “Are real police detectives getting punked by SAPD Police Chief Rojas?”