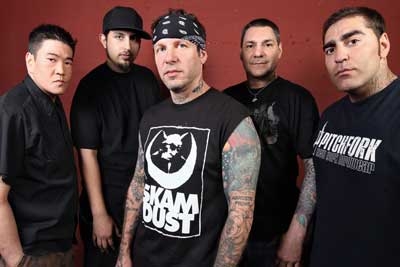 Warriors is a statement of strength in the face of adversity and few bands make a statement louder than AGNOSTIC FRONT.

In today’s civilization, people continue to suffer undergoing the grief, corruption, oppression and exploitation without a way to elude their troubles. Many have lived through these problems for ages, and the moment one tries to fight for what they believe is right, the elite brings them down and their voices are disregarded. For over a decade, Agnostic Front has helped get these messages across to the populace to help solve these problems through socially driven music known as “hardcore.” In their latest offering, the band gives power and strength to these ignored voices. As one of the original hardcore bands that lived and breathed the problems that controlled their everyday New York City lifestyle since 1983, they have been amongst the most venerable and notorious outcasts of this hardcore movement.

Agnostic Front will be joined by Death by Stereo. Since their inception in 1998, Death by Stereo has been balancing consciousness and chaos with their unique genre-bending amalgam of hardcore, metal and punk. Recently signed to vocalist Serj Tankian’s (System of a Down) label Serjical Strike Records, the Orange County based band will see their 5th studio album Death Is My Only Friend released July 7th of this year. Previously, the band released their last three studio records via Epitaph Records and their debut album on Indecision.

DBS, as they are known by many of their loyal followers, have assembled a worldwide fan base built upon a seemingly endless international tour schedule, with enough passport stamps to make many of their contemporaries jealous. They have shared the stage many times over with the likes of Slipknot, AFI, Serj Tankian, Avenged Sevenfold, and Rise Against, just to name a few. They have headlined some of the biggest and best festivals around the world (Germany’s “With Full Force”, Belgium’s “Grozerock”, U.S.’s “Warped Tour” and Colombia’s “Rock Al Parque”). Having toured in over 20 countries is an accomplishment few bands of any stature can lay claim to.

Click here to buy tickets. Tickets start at $13 in advance and $15 at the door.