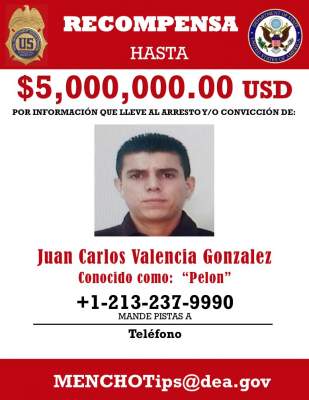 A federal court in the District of Columbia unsealed an indictment earlier this year against Juan Carlos Valencia Gonzalez, aka Pelon, Tricky Tres, O3, El 3, JP, and Pelacas. Yesterday, the U.S. Department of State announced a reward of up to $5 million for information leading to his arrest and conviction.

A grand jury in the District of Columbia returned an indictment against Juan Carlos Valencia Gonzalez on Oct. 8, 2020. According to court documents, beginning in as early as 2007, Valencia Gonzalez conspired with others to import more than five kilograms of cocaine and 500 grams or more of methamphetamine into the United States from a foreign country. Court documents further allege that Valencia Gonzalez carried, used, and possessed a firearm in furtherance of his drug trafficking.

“The United States is committed to working with our global partners to pursue large scale drug trafficking organizations,” said Assistant Attorney General Kenneth A. Polite Jr. of the Justice Department’s Criminal Division. “These organizations target and damage our communities, and U.S. law enforcement will target those individuals responsible for the proliferation of dangerous drugs here at home, no matter where they reside.”

“CJNG is one of Mexico’s most violent and prolific drug trafficking organizations, which has been flooding the United States with fentanyl and methamphetamine, causing the overdose and death of countless Americans,” said DEA Administrator Anne Milgram. “Today’s reward announcement underscores the U.S. government’s commitment to pursuing the individuals and organizations that are causing the most harm in our communities.”

This case is part of “Operation Pinky and the Brain,” which was supported by the Organized Crime and Drug Enforcement Task Force (OCDETF). The DEA’s Los Angeles Field Division is investigating the case.

The allegations of a criminal indictment are merely an allegation, and all defendants are presumed innocent until proven guilty beyond a reasonable doubt in a court of law.