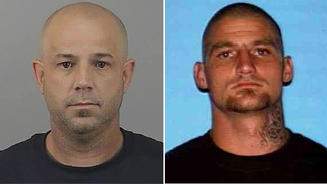 Jason Erling Hallstrom, 41, a man who was wounded in an officer-involved shooting in Santa Ana on March 15,  died last Saturday, according to Santa Ana Police Cpl. Anthony Bertagna, as quoted in the L.A. Times.

Hallstrom had been charged with a felony count of unlawfully taking a vehicle and a misdemeanor count of resisting a peace officer, according to court records. He was due in court Monday.

Here is what happened, according to the O.C. Register:

On March 15, Hallstrom and Travis Mock, 29, were being chased by SWAT officers on I-5 when they got off at Grand Avenue and headed north, Santa Ana authorities said.

The vehicle pursuit ended when the Nissan crashed at Grand Avenue at 15th Street; officers fired at and hit both men as they attempted to flee.

A woman who calls herself Summer Shine commented at the Register that she had borne a daughter with Hallstrom and that the facts were not being reported. I have reached out to her for more info.  In the meantime, here are some of her comments:

It is generally a bad idea to flee from the police.  But this case is something else.  I have never heard of a SWAT team chasing down and shooting someone.  They usually enter buildings to do their work.  Did Hallstrom and Mock rob someone or some company?  The OCDA should eventually put out a report about the police shooting.  Hopefully it will be enlightening.

24 thoughts on “Why did the SAPD kill Jason Erling Hallstrom and was it justified?”