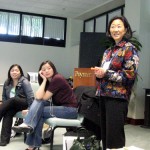 « Who else might run for Mayor of Santa Ana this year?
Senate Committee approves Correa bill in response to pension fund investment scandal »

21 thoughts on “Who will run for the Santa Ana School Board in November?”