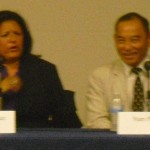 A big thank you to Connie Hamilton and the folks with the South Coast Neighborhood Association for putting on the Ward 6 candidates forum at MacArthur Middle School this evening. Unfortunately for Hamilton, the neighborhood association and all those in attendance this may have been the worst such event in the history of Santa Ana politics. Those were two painful hours that none of us will ever recover.

Only the incumbent, Councilman Sal Tinajero, showed up with a coherant message and a definitive plan for what he will do once he is reelected. His opponents, Helen Martinez and Nam Pham, were simply horrible. I am sorry if that seems a bit harsh but in reality that is actually a kind analysis of their performance. These two clearly are in way over their heads and really have no business on the ballot.

Martinez appeared to be taking her cues from Thomas Gordon via text message as he sat in the audience. Unfortunately for her, just as Gordon can’t count to twenty, Martinez was unable to articulate what Gordon was feeding her. She kept babbling on about “being business friendly” and yet never once explained what she actually meant by the phrase.

Martinez also talked about developing programs to get parents more involved in their childrens schooling, wanting to get more police officers on the street, increase code enforcement efforts and step up graffiti abatement. She didn’t however explain how she would pay for such things other than to say she would “get more grants.” I guess she doesn’t realize our current council is exhausitive in their quest to get any grants that are available.

Hart prayed for release, but the horrible forum kept going for two hours

As a result of Martinez’ rhetoric without a plan Councilman Tinajero opined that she must think that there must be a “leprechaun with a pot of gold” out there to pay for all these things. Tinajero said that he and everyone else in the room want the things Martinez wants but how can we pay for them. He admitted that if the economy doesn’t turn around that we may have to look into a small assessment to pay for new police officers and other services.

I would like to offer a critique of Pham’s performance unfortunately I am still trying to decipher his answers. He just seemed to ramble on endlessly without ever giving a solid answer or offer any type of significant idea’s or plans for what he might do should he be elected to the seat. The only thing I am certain of is that Pham believes that we should never send our police officers on a call without “back up”.

The sad part about all this is that Martinez and Pham were thrown to the wolves by folks alligned with Gordon’s failed campaign and perhaps another well known official (more to follow on this in the coming weeks). Evidence is piling up that clearly points to Martinez and Pham being nothing more than vote splitters in an attempt to get Gordon elected. The plan blew up when Gordon failed to count to twenty and get the required signatures to qualify for the ballot.

The Amezcua and Hart Show

Besides Tinajero the big winner of the night had to be Alfredo Amezcua who showed up with his fellow mayoral candidate Charles Hart. Amezcua won a tequilla basket in the raffle drawing. Perhaps he can use it to help console he and his followers on election night.

Thomas Gordon supporters did not go away disappointed. “Tommy Boy” did get a chance to take the mic, too bad for him it wasn’t as part of the candidate forum but instead he got to read the winning raffle numbers. Thankfully they didn’t give him a job that required any basic math skills given his issues with counting to twenty.

The Strouds lose their cool

The night was not without fireworks. Bitter and banished ex-commissioner Glen Stroud, the man behind the fraudulent grand jury report, became unhinged and hurled an “f” bomb right in front of Councilman Tinajero’s young son. Way to keep it classy Glen.

Art Pedroza will be posting video of this event later, but I must warn you it will be painful to watch.

« Reconnect Nature writing workshops in Santa Ana on Sep. 3 and 4
Why I am voting for Santa Ana Mayor Miguel Pulido »