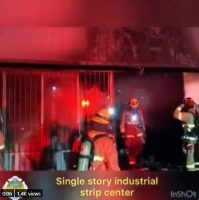 The OCFA reported a 2 alarm commercial fire in Santa Ana this morning at an industrial strip center at the 2000 block of Yale, just south of Warner.

Initial crews reported heavy fire in the middle unit. They were attempting to hold the fire to one unit. Heavy overhaul in progress.

Overhaul and investigation continues. No injuries reported at this time.

« Costa Mesa police officers fatally shot a man who was backing up over another suspect
O.C. CHP officer charged with using confidential police records to help a friend »