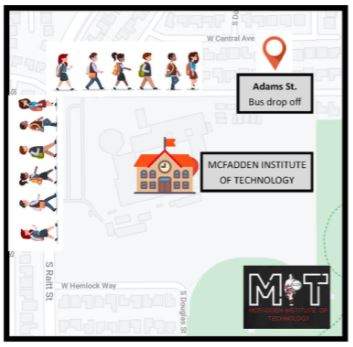 The Annual International Walk to School Day will be held on Wednesday, October 6, 2021. To celebrate, the Santa Ana Unified School District (SAUSD) is holding a walk culminating in a special ceremony at McFadden Institute of Technology (MIT). Students, parents, school district leaders, community members and Segerstrom High School’s Drumline band will walk together from the two corners around the campus to the school, where a Walk to School Day assembly will be held.

7:45 a.m. to 8:10 a.m. – Segerstrom High School Drumline performs during the walk with the group starting at the Adams St. drop off just east of Raitt St.

8 a.m. – Students walk to the elementary entrance and take photos with the Cone Guys and Officer McGruff, and Star Wars Characters.