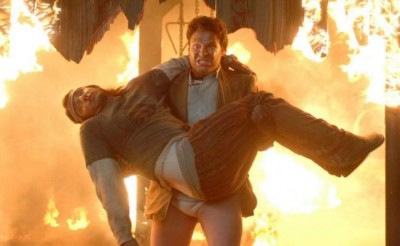 Pot Building Burns Down – Scene from the movie Pineapple Express

A fire damaged a Santa Ana home Friday, sending an apparent personal medical marijuana operation up in smoke.The fire was reported at 11:40 a.m. in the 5000 block of Lindell Lane, said Orange County Fire Authority Capt. Steve Concialdi, according to the OC Register.

When firefighters arrived, thick smoke and fire were coming from the home’s second story, he said. The fire caused heavy damage to the upstairs portion of the house and attic. The damages were estimated to be about $250,000 to the home’s contents and the structure, Concialdi said.

The firefighters found marijuana plants growing in three upstairs bedrooms. But the residents all had medical marijuana cards.  Apparently the SAPD is investigating.

These fires are common in such operations.  Pot growers often use special indoor lights that can be an electrical fire hazard if not wired correctly.

Santa Ana residents will be able to vote in November for a ballot measure that will set up approved medical marijuana dispensaries that perhaps might result in less home growing operations.