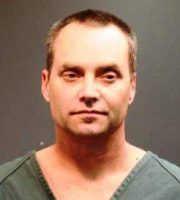 Hopkins died at the scene. Reichstein took the coward’s way out as he opted to flee from the scene.

Reichstein did not get too far however as a police officer caught him when he saw him pass by in the heavily damaged Xterra. Apparently Reichstein was shouting expletives at the time.

Back in June Reichstein accepted a plea deal that called for him to admit to felony counts of hit-and-run and gross vehicular manslaughter while intoxicated, as he had a blood alcohol content of 0.19 percent, which is more than double the legal limit, when he ran over Hopkins, according to the OCDA.

Reichstein previously pleaded guilty in 2011 to a previous charge of driving under the influence.

Reichstein avoid a felony murder charge when he accepted his latest plea deal, avoiding a sentence of up to 34 years to life in prison.