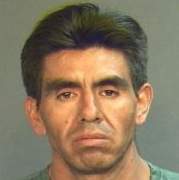 At the time of the incident, Castillo-Sanchez knew John Doe and his mother.

When the victim got home, he told his mother about the assault. Castillo-Sanchez got into an argument with the boy’s mother and left the home. Santa Ana police officers found Castillo-Sanchez at a nearby residence and arrested him that same night.

Castillo-Sanchez’s lifetime registration as a sex offender bars him from entering County recreational areas and City parks which have passed the Sex Offender Ordinance. Visit www.orangecountyda.com to read the prior press releases on the County’s Sex Offender Ordinance as well as the 14 other cities that have enacted the Child Safety Zone Ordinance.

« How about a Santa Ana gun exchange – for books at Librería Martinez?
Are Benavides and his Council allies trying to fire City Manager Walters? »