How about a Santa Ana gun exchange – for books at Librería Martinez? 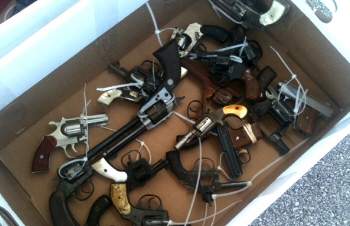 Gun buyback programs have not always been a success but the concept is a good one if implemented correctly.  For example, limiting the gun buyback to guns no older than 15-20 years and accepting only guns in working condition.

I would prefer to see the guns exchanged not for cash but rather for vouchers – and the best way to spend those would be for books at Librería Martinez, the bookstore in Downtown Santa Ana that Chapman University recently acquired from Ruebén Martinez.  Guns for books!

I would take this one step further and double the buyback voucher for anyone who has a criminal record and is turning in his guns.

I can almost guarantee that Mayor Pulido will be able to get corporate support for this program.  And the City Council should support it.

Do you support Mayor Pulido’s idea?  How would you run a Santa Ana gun buyback program?  Would it make our city safer?