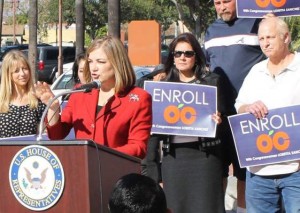 Saturday Santa Ana Enrollment Event One of Few Before Deadline

Because of phone and internet capacity concerns, Covered California has extended the final deadline to April 15, but only if residents begin an application by Monday, March 31. Adult residents who have not enrolled by April 15 will face a fine of $95 or one percent of their yearly household income, whichever is higher.