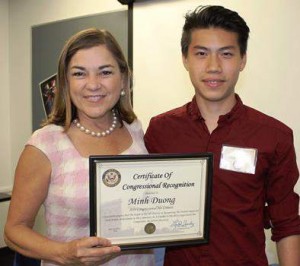 “Every year, the Congressional Art Competition recognizes the extraordinary talent of our nation’s young people,” said Rep. Sanchez. “This year’s 46th District winners wowed our judges with their work and I am honored to represent this group of impressive young artists. Congratulations to all the winning students and their families.” 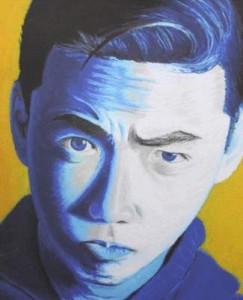 Santiago High School student Minh Duong was awarded first place for the art piece “Found Me Out.” Minh’s artwork will be displayed for one year as part of a national exhibit in the Cannon Corridor of the U.S. Capitol building. Minh will receive a $10,000 scholarship to the Art Institute of California—Orange County, a campus of Argosy University. Minh also will receive two round-trip tickets to Washington, D.C., to attend the national reception and ribbon cutting ceremony next Wednesday.

The second place award was shared between Godinez Fundamental High School students Aidee Sanchez for her piece titled “Jungle Gym” and Melissa Escobedo for her piece “Beyond the Shore.” The second place prize is a $5,000 scholarship to the Art Institute of California—Orange County. Tri Nguyen of Santiago High School received third place recognition and a $3,000 scholarship to the Art Institute for his untitled work.