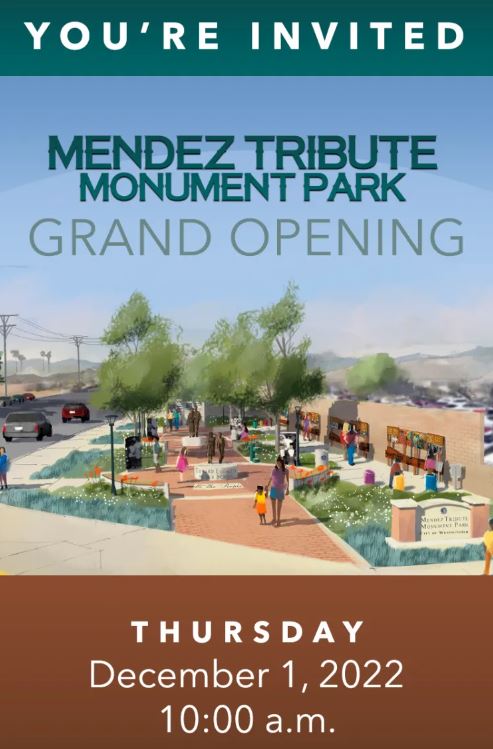 The City of Westminster, in partnership with the Orange County Department of Education, will host a grand opening ceremony on Thursday, Dec. 1 to celebrate the completion of a new park and monument honoring the historic Mendez v. Westminster case, which led to the desegregation of California’s public schools 75 years ago.

The event, free and open to the public, will begin at 10 a.m. at 7371 Westminster Blvd., where community leaders and special guest dignitaries will deliver welcoming remarks and officially open Mendez Tribute Monument Park to the community with a ceremonial ribbon cutting.

The case of Mendez v. Westminster dates back to 1943, when Gonzalo and Felicitas Mendez sought to enroll their daughter, Sylvia, and sons Geronimo (Jerome) and Gonzalo, Jr. at 17th Street School, which had been designated for white children. Despite being local residents and U.S. citizens, the Mendez parents were told their children had to attend the less desirable Hoover Elementary, known as the “Mexican school.”

Gonzalo and Felicitas Mendez hired attorney David Marcus and teamed up with four other Mexican-American families to pursue justice through the court system. Their lawsuit, officially known as Mendez, et al v. Westminster, et al, argued that 5,000 children throughout the county were harmed by unjust discrimination policies. Under the U.S. Constitution’s 14th Amendment, the plaintiffs argued equal protection meant citizens could not be treated differently based on their race.

In 1946, U.S. District Court Judge Paul J. McCormick ruled in favor of the five families. Although the decision was appealed, it was upheld by the U.S. Ninth Circuit Court of Appeals on April 14, 1947, one day before Jackie Robinson played his first major league baseball game with the Brooklyn Dodgers.

The Mendez case ultimately laid the foundation for the U.S. Supreme Court to declare forced segregation unconstitutional in its landmark 1954 decision, Brown v. Board of Education of Topeka. Still, the Orange County lawsuit was not widely known until Sylvia Mendez began raising awareness at the request of her mother.