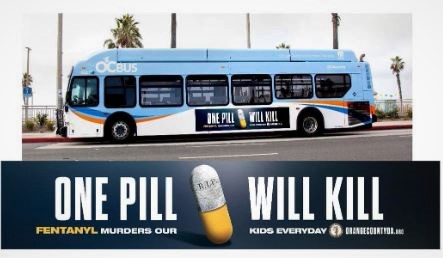 District Attorney Spitzer is also calling on all members of the Orange County Superior Court to allow prosecutors to read into the court record the District Attorney’s controlled substance advisement in cases in which defendants have been convicted of drug-related offenses to warn them that if they commit a drug-related offense again they could be charged with murder. Spitzer adopted the advisement last November as another tool to hold fentanyl dealers accountable for killing their customers.

According to the Centers for Disease Control and Prevention, people under the age of 50 are more likely to die from drugs than any other cause including heart disease and cancer. Many of these deaths are young people who believed they were taking drugs like OxyContin, Xanax and Percocet and instead were unknowingly supplied a fatal dose of fentanyl. Fentanyl is reportedly 60 to 100 times more potent than morphine and some fentanyl analogues may be as much as 10,000 times more potent. A mere two milligrams of these substances may be deadly.

The Orange County District Attorney’s bus campaign ads feature graphic slogans including FENTANYL ENDS LIFE IN A SNAP – WILL YOU BURY YOUR CHILD?, a fentanyl death meter counting the number of deaths in California this year, and ONE PILL WILL KILL – FENTANYL MURDERS OUR KIDS EVERY DAY with a pill transformed into a tombstone. The ads, designed in conjunction with OUTFRONT Media, are on display on the sides and backs of Orange County Transit Authority (OCTA) throughout Orange County.
Last November, District Attorney Spitzer announced a new policy to allow Orange County prosecutors to charge convicted drug dealers with murder if they manufacture or sell drugs, including fentanyl, and someone dies as a result.

The announcement marked a significant change in how drug-related deaths are handled by California’s third-largest prosecutor’s office as well as law enforcement agencies across Orange County.

The advisement is similar to the Watson advisement which California law requires be given to drivers convicted of driving under drugs or alcohol that warns that if the driver drives under the influence again and kills someone, they can be charged with murder.

Some Orange County Superior Court judges have refused to give the controlled substance advisement or allow the advisement to be read into the record by prosecutors.

Last year, the state Legislature rejected SB 350 which would have made controlled substance advisement a state law requirement. Without that requirement in place, the Orange County District Attorney’s Office is joining several other District Attorney Offices across California in doing what the Legislature has failed to do—protect victims in our county.

In May, District Attorney Spitzer in cooperation with the United States Attorney General’s Office cross-designated an Orange County prosecutor as a federal prosecutor to file fentanyl-related death cases. Federal statutes allow for a 20-year mandatory minimum for drug dealers who sell drugs, including fentanyl, who kill their customers.”

“The California legislature and some of our Orange County Superior Court judges have turned their backs on these grieving parents by refusing to give us the tools we need to fight these drug dealers with state charges,” said Orange County District Attorney Todd Spitzer. “If we can’t get what these victims deserve through the state courts, we will take our cases to the United States Attorney to be prosecuted federally. Sadly, fentanyl has created a new class of murder victims – and we aren’t giving up on justice for them.”