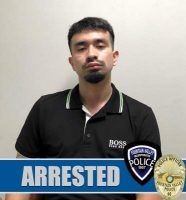 Police detectives began surveilling Castaneda’s activities and he was subsequently detained in the area of Orangethorpe and Gilbert in the City of Fullerton.