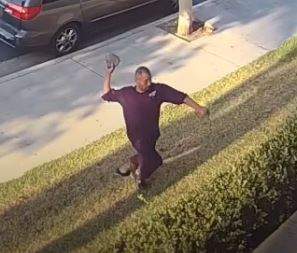 On 08/23/2020, at approximately 7:59AM, Archangel Michael Coptic Church was conducting an outside mass near the entrance of the church. During mass, the parishioners heard several loud “bangs” against the wall on the south side of the church. Parishioners saw Suspect 1 walk west on Edinger passed them.

Surveillance cameras captured the suspect throwing unknown solid objects, such as rocks/pieces of concrete, at the church’s glass doors and window, shattering the glass.

On 10/05/2020, at approximately 3:10AM, Suspect 2 approached the church on foot walking west on Edinger. The church’s surveillance camera captured the suspect stop on the south side of the church, retrieve several solid objects such as rocks/pieces of concrete, and throw them at the church’s glass doors. The suspect then fled east on Edinger.

At this time, there is no indication that these two separate incidents are hate crimes. The investigation is ongoing.

Anyone with information identifying the wanted suspects in this case is asked to contact Detective R. Wilson at (714) 245-8551 or RashadWilson@santa-ana.org.