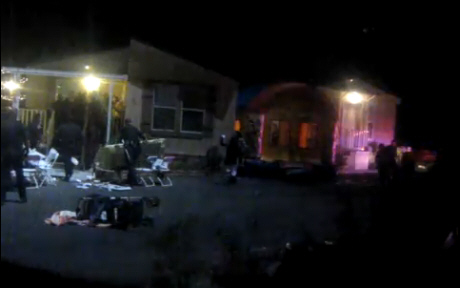 The talk of the town this weekend was a melee that broke out at a mobile home park, in Santa Ana, when police officers showed up, for the second time that night, to follow up on a complaint about noise.

At 8:30 p.m. Saturday, police responded to requests from residents at Caravana Mobile Home Park at 306 S. Sullivan St., after a party became loud, Cpl. Anthony Bertagna said. Police issued a warning to the partygoers and left. They were called back again at 9:15 p.m. when more residents complained, according to the O.C. Register.

Someone at the party shot a video, which shows complete chaos as the police officers appear to go out of their way to damage furniture at the party.  You can see the video above.

I have been told that the Santa Ana Police Department has their own video.  They have yet to fully explain what happened.  They did so however that residents were wrong about the number of SAPD vehicles onsite.  Residents claimed there were 46 vehicles, which seems a bit much.

As one might imagine, there are a lot of damaging reports from the residents who got rousted, including a pregnant lady that apparently got pushed around by the officers.

I think we need to give the SAPD some time to explain themselves.  Clearly the residents failed to obey the police officers the first time they were warned.  It is sad that a birthday party for an 18 year old went south, but you cannot blame the police for that, although I am sure some local blogs will do so.

The real question is why did folks call the cops at 8:30 pm?  That seems a bit early to be calling the police about a party.

Readers at the Register have of course put up a bunch of racist comments.  But one of the parents at the party noted that his sons go to UCI and UCLA.  This was not a gang event.  These folks were just having a good time and things got out of hand when someone in the neighborhood called in the cops.

I am glad no one was seriously hurt.