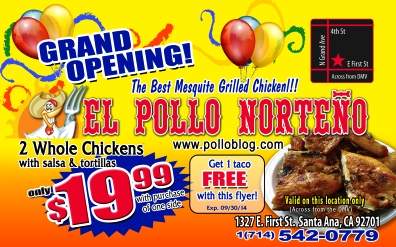 El Pollo Norteño has opened a new location in Santa Ana, located at 1327 E. First St., in Santa Ana, near Grand Ave., across from the Santa Ana DMV. This location replaces the one that was lost via eminent domain when the City of Santa Ana widened Grand Ave.

Right now you can enjoy a Grand Opening special of two whole marinated and grilled chickens, with homemade salsa and warm tortillas for only $19.95 or use the coupon above to get a free taco. This offer is only valid at this new location.

While El Pollo Norteño is known for their delicious grilled chicken they also offer Family Packs that can include Carne Asada and Carnitas as well as their Mexican rice and either refried or whole beans. And you can buy all the usual Mexican favorites at their restaurants, including tacos, burritos, and tortas. Click here to check out their menu.

They also cater events and company functions. Call them today at 1-866-MI-POLLO!