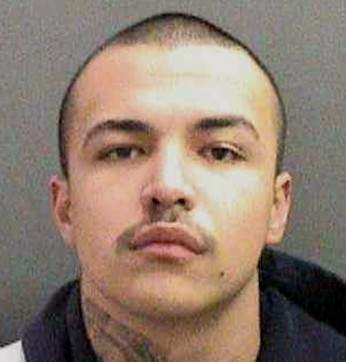 SANTA ANA, Calif. – A Santa Ana criminal street gang member was convicted today of robbing a couple at gunpoint outside of their home to steal their car after being linked to the crime through DNA using the Orange County District Attorney’s (OCDA) local DNA database. Francisco Alberto Rodriguez, 27, Santa Ana, was found guilty by a jury of one felony count each of attempted murder, second degree robbery, second degree vehicle burglary, possession of a firearm by a felon, and street terrorism. Sentencing enhancements for criminal street gang activity, personal use of a firearm, and gang member vicarious use of a firearm were also found to be true. The defendant faces a maximum sentence of 29 years to life in state prison at his sentencing on April 28, 2017, at 9:00 a.m. in Department C-29, Central Justice Center, Santa Ana.

Co-defendant Jesus Humberto Mejia, 37, Santa Ana, a member of the same gang as Rodriguez, was found guilty by a jury on Aug. 18, 2015, of two felony counts each of attempted murder, first degree residential burglary, attempted first degree robbery, and possession of a firearm by a felon, and one felony count each of second degree vehicular burglary, second degree robbery, and street terrorism. Sentencing enhancements for criminal street gang activity, personal use of a firearm, and gang member vicarious use of a firearm were also found to be true. Mejia has two prior strike convictions for first degree residential burglary and active participation in a criminal street gang in 2007. The defendant was sentenced on Dec. 18, 2015, to an indeterminate term of 44 years to life and 62 determinate years in state prison.

On the night of Dec. 6, 2009, Rodriguez and Mejia entered a carport garage in Santa Ana belonging to a 43-year-old man and his 39-year-old wife. The defendants attempted to steal the victims’ car or its contents by breaking the car window.

The victims came outside upon hearing the noise in their carport. Rodriguez, who was seated in the car, stepped out of the vehicle and pointed a shotgun at the couple. Rodriguez pulled the trigger, but the firearm did not fire. Mejia stood near the car and pointed a handgun at the victims.

The female victim attempted to call the police, but Mejia took the cell phone from her at gunpoint. The defendants then fled the scene.

On Dec. 12, 2009, Mejia and an unidentified accomplice knocked on the door of a Santa Ana residence with the intention of burglarizing the home. Mejia carried a flashlight and ordered the residents to open the door. When the residents refused, Mejia fled the scene. That same night, Mejia and his unidentified accomplice entered a garage of a Santa Ana home that had been converted into a bedroom. Mejia woke the resident sleeping inside, pointed a gun at the victim, and asked for additional firearms. After rummaging through the converted bedroom, Mejia fled the scene.

On the night of Dec. 18, 2009, Mejia confronted three men who were drinking beer in his neighborhood because he felt that they were being disrespectful. Mejia pointed a firearm at one of the victims and pulled the trigger. The firearm did not fire. Mejia again pulled the trigger and fled the scene after the firearm failed to fire a second time.

The Santa Ana Police Department investigated these cases and arrested Mejia, who was charged by the OCDA on Dec. 21, 2009. Rodriguez was unidentified until March 22, 2010, when DNA extracted from blood on the broken car window was matched to the defendant.

In 2005, Rodriguez’s DNA was taken as a result of another case and was submitted to the national DNA database, Combined DNA Index System (CODIS). After the submission, an error was made and Rodriguez’s DNA was inadvertently not entered into CODIS. This error went undetected. Since 2005 Rodriguez’s criminal record has reflected that his DNA was in CODIS.

In July 2009, Rodriguez pleaded guilty (Case #09CF0382) to one felony count of possession of a controlled substance and one misdemeanor count each of resisting a peace officer and battery on a peace officer. He was sentenced to 212 days in jail, three years of formal probation, and was ordered to submit his DNA to the OCDA’s local DNA database. Due to the erroneous notation on his criminal record that Rodriguez’s DNA was already in CODIS, his DNA was not resubmitted to the national database.

Rodriguez was linked to the Dec. 6, 2009, crime using the OCDA’s local DNA database.

Deputy District Attorney Jeff Moore of the Gang/TARGET Unit is prosecuting this case.