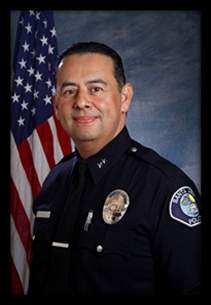 Chief Valentin joined the Santa Ana Police Department in 1990 and has worked his way through the ranks from Police Officer to Chief of Police. “Chief Valentin was appointed Acting Chief of Police on June 20, 2017 and confirmed as the permanent Police Chief on February 20, 2018, unanimously by the Santa Ana City Council. His leadership will produce several new and positive approaches in the community,” said Councilmember Tinajero, Chair of the Public Safety, Code Enforcement and Neighborhood Empowerment Council Committee.

Chief Valentin has worked all major areas of the Police Department, with over 16 years of Command Level experience, including Senior Management Command as Deputy Chief of Field Operations, Investigations and Administration. For nearly five years, he served as the Chief of Police for the Santa Ana Unified School District Police Department, the 3rd largest K-12 police agency in California, where he received local, regional and national recognition for his leadership and organizational transformation of the Department.

Chief Valentin holds a Master’s Degree in Public Administration, with an emphasis in Human Resources, from the California State University, Fullerton. In 2008, Chief Valentin was inducted into the Santa Ana College Alumni Hall of Fame for his contributions to the Santa Ana community. He is also a recipient of the California League of Community Colleges Hall of Fame for his significant achievements.

“David Valentin is a talented Chief of Police that has gained the trust of his officers, the business sector and community at large with his leadership and transparency initiatives. It is a pleasure to work with such a talented police executive,” said City Manager Raul Godinez II. Chief Valentin served eight years on the Board of Directors for the Santa Ana Boys and Girls Club — and currently serves on the Executive Board of Directors as Vice President for the Santa Ana College Foundation. He also served as legislative advocate for support of higher education at the State Capitol. An active member for the International Chiefs of Police and the California Police Chiefs Associations, Chief Valentin has also served on the California Police Chiefs Association Legislative Committee and was selected to the IACP Victim & Civil Rights Committee in 2016.

Chief Valentin is a graduate of both the FBI National Academy and the California POST Command College.