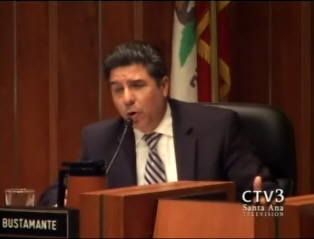 I am also hearing that the City of Santa Ana may have to start their own investigation of Bustamante – which could turn up even more cases of alleged harassment.

The Santa Ana City Council is meeting tonight, at the SAPD Community Room.  This meeting won’t be televised live but I am told that it will be televised after the meeting is over.  You can watch it then online here.

A friend of mine reported that Bustamante did show up to the meeting tonight – as did his friends in the Usual Suspects.  They are there to screech about the Chivas soccer stadium deal, which I still don’t think will happen, even though I hope it will.

« Carlos Bustamante anti-tax crusader???
Scare away hunger by building a scarecrow at the Great Park »