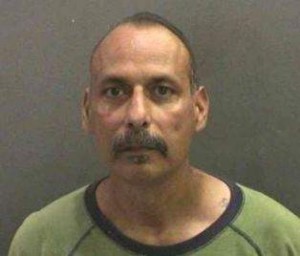 SANTA ANA – Two career criminals, dubbed the “Market Duo” Bank Robbers by the Federal Bureau of Investigation (FBI), were sentenced today for committing robberies in five Orange County banks and leading police on a high speed pursuit. A third defendant has already been sentenced in this case.

Andres Soto Jr., 52, Whittier, was sentenced to 140 years to life in state prison. He was found guilty by a jury March 11, 2014, of eight felony counts of second degree robbery and four felony counts of second degree commercial burglary. Soto was also convicted of sentencing enhancements for prior strike violations committed in Los Angeles County for a residential burglary in 1983 and two bank robbery convictions in 1993.

Richard Valdez, 54, La Habra, was sentenced to 40 years to life in state prison. He was found guilty by a jury March 11, 2014, of two felony counts of second degree robbery and one felony count of second degree commercial burglary. Valdez was also convicted of sentencing enhancements for prior strike convictions committed in Los Angeles County for a robbery in 1983, two robberies in 1987, and assault with a deadly weapon in 2003.

Paul Acosta Jr., 30, Los Angeles, was sentenced March 21, 2014, to six years in state prison. He pleaded guilty Feb. 18, 2014, to five felony counts of second degree robbery, one felony count of evading a peace officer while driving recklessly, and sentencing enhancements for prior felony prison convictions for drug possession and theft in 2008 and 2010 in Los Angeles County. Acosta cooperated with law enforcement and testified against his two co-defendants during their jury trial.

Acosta and Soto planned four robberies that took place in the banks. Valdez was an acquaintance of Acosta and participated in their last bank robbery.

Between Oct. 25, 2011, and Dec. 10, 2011, Acosta and Soto entered three US Bank branches and a Wells Fargo bank in La Habra, Lake Forest, Placentia, and Seal Beach. Soto held a bag over his hand to simulate a gun while Acosta robbed tellers of money from inside the bank and fled the scene.

On Jan. 5, 2012, Acosta and Valdez entered the same Wells Fargo Bank in Placentia, in which Acosta and Soto had committed a robbery previously in November 2011. Acosta robbed money from a bank teller by holding a bag over his hand to simulate a gun while Valdez provided back-up.

As Acosta and Valdez fled the scene, they did not stop their vehicle when officers from the Anaheim Police Department (APD) tried to pull them over. The defendants led police on a high-speed pursuit southbound on California State Route 57 and westbound on California State Route 91, traveling at speeds over 100 mph from Orange County to Los Angeles County. An APD helicopter assisted in the pursuit while officers from Placentia and La Habra Police Departments, the Orange County Sherriff’s Department and the FBI pursued the defendants on the freeway.

The pursuit ended in Paramount, Los Angeles County, and Acosta was apprehended while trying to flee from the vehicle. Acosta was shot by a Los Angeles County Sheriff’s Department deputy, and a police canine was able to detain him. Acosta was transported to Saint Francis Medical Center in the City of Lynwood and was later released to Orange County jail. Valdez managed to evade officers and fled the scene following the pursuit.

Written impact statements were submitted by two of the victims. One victim described suffering depression, anger, confusion, and a need for therapy for months after the crime. The second wrote, in part, “I have had to receive counseling and professional aid to get over the traumatic effects of having my life threatened at my place of employment. Having their faces and the threatening words replay in mind continuously has directly impacted the way I go about my daily work life, always wondering if the next customer I assist is going to do the same. No one should ever have to feel like their life is going to end over someone’s decision that money is more important to them than your life.”

Both defense attorneys argued for the court to strike the prior strike convictions for the purpose of sentencing. In denying their motion, the court found that each defendant fell squarely within the purpose of the Three-Strikes Law.