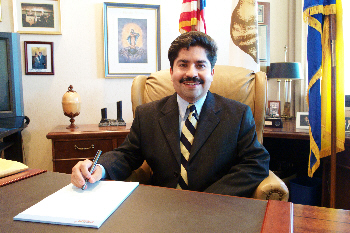 Does Solorio read the newspapers?  The L.A. Times just reported that:

Last month’s unemployment rate ticked up to 12% from 11.8% in June, according to figures released Friday by the state Employment Development Department. California now has the second-highest rate of unemployment in the nation, trailing only Nevada at 12.9%. Its jobless rate is well above the U.S. average of 9.1% in July.

“The California economy is treading water. It’s growing but not fast enough to create net new jobs,” said Scott Anderson, the senior economist at Wells Fargo Securities. “The recent knock in consumer and business confidence could be enough to tip California back into recession.”

And yet Solorio has proposed two anti-employer bills this month – he had previously proposed to force building service contractors to hire their competitors’ employees, when they win a new bid to service a building.  You can read about that disastrous bill by clicking here.

Solorio is once more getting ripped all over the state for this latest ridiculous bill.  Here are a few excerpts:

We will update this article as the newspapers begin to rip Solorio, again, in editorials.  My own personal sentiment is that five years is RIDICULOUS for temporary disability.  The only reason a case would go that long would be if it was litigated – so this bill looks like a carrot tossed to the claim lawyers, by Solorio.