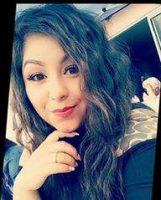 On 10/24/2017, at approximately 11:22 pm, officers responded to the scene of a vehicle vs. pedestrian traffic collision in the 3600 block of West First Street (near Santa Anita Park). Officers located a 27-year old female pedestrian, Johanna Vargas, suffering from major head trauma as result of the collision. The Orange County Fire Authority responded to the scene and transported the victim to UCI medical center to be treated. The victim succumbs to her injuries at the hospital.

The SAPD Major Collision Team responded to the scene to take over the investigation. Based on witness statements the two pedestrians were walking in a northbound direction from the south sidewalk of 3600 W 1st. According to one of the pedestrians, when they reached the number two lane of west bound traffic, a vehicle could be seen approaching their direction. One of the pedestrians managed to cross First Street avoiding being struck by the vehicle. The second pedestrian was unable to cross before being struck by the vehicle, a 1994 Gold Toyota Corolla, which was traveling west on First Street in the number two lane.

« Woman gets a light prison sentence after a DUI crash that badly injured a policeman in Orange
The Costa Mesa Police Dept. is conducting a DUI checkpoint this Friday »