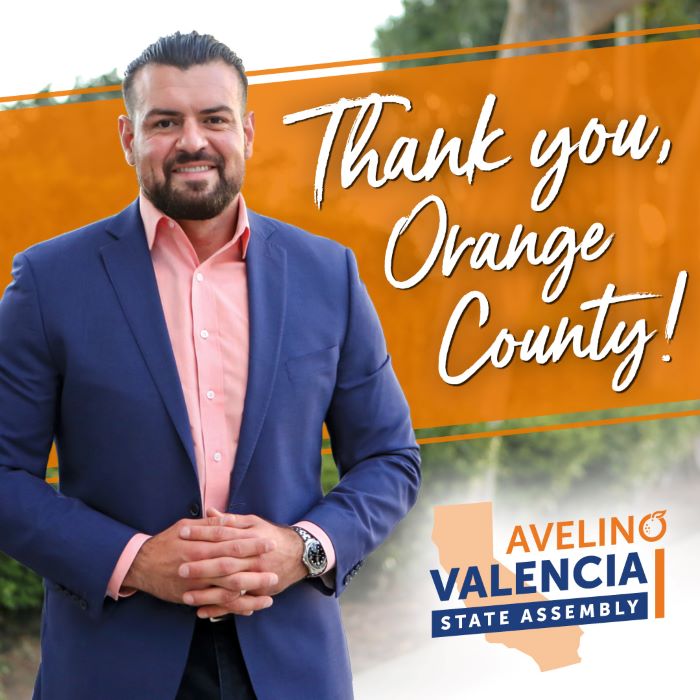 Avelino Valencia has declared victory in the race for the 68th Assembly District, which includes most of Santa Ana, Anaheim and Orange.

Valencia posted this note on Facebook, “I am deeply grateful to the countless voters, volunteers, and supporters who worked to make our victory possible. In the State Assembly, I am going to fight every day to be an effective advocate for residents, and to support the schools, working families, neighborhoods, and businesses that make our communities strong and vibrant. Thank you, Orange County!”

Valencia, a Democrat, beat Santa Ana resident Mike Tardif, a Republican. While votes are still being counted Valencia has over 20,000 more votes than Tardif. Tardif already called Valencia to congratulate him on his victory. He also told Valencia that he looks forward to working with him for the betterment of the community.

Valencia won despite being dragged into the brouhaha in Anaheim when the FBI began an investigation into the actions of former Anaheim Mayor Harry Sidhu, a Valencia ally.

Avelino Valencia is a local City Councilmember with deep roots in Orange County and a record of getting things done for our communities.

As a member of the Anaheim City Council, Avelino worked to speed up the rollout of COVID-19 vaccines, expand access to mental health resources, develop a new city park, and establish a small business assistance program. He’s also worked closely with local police officers, firefighters, and paramedics to make neighborhoods safer and improve emergency response times. In addition, Avelino’s been responsive to residents, collaborating with them to problem-solve immediate needs and improve their long-term quality of life, all while being a responsible fiscal steward of tax dollars.

Avelino currently serves as the Chief Deputy for State Assemblymember Tom Daly. In this role, he works to craft state policies and help local residents navigate state government. Avelino previously served as the Chair of the City of Anaheim’s Budget, Investment, & Technology Commission since 2016. As the chair of this commission, he focused on economic growth and safeguarding public resources on behalf of taxpayers.

Avelino grew up in Orange County, the son of immigrant parents who built a successful small business. He attended local public schools, including Roosevelt Elementary, South Junior High, and Katella High School. Avelino earned an associate degree from Fullerton College and a bachelor’s degree from San Jose State University. After playing college football and briefly pursuing a career in the National Football League (NFL), he coached at Fullerton College and worked as a special education instructional assistant in the Anaheim Elementary School District. Avelino continued his education at Johns Hopkins University, where he earned a master’s degree in Public Management.

Avelino is married to this high school sweetheart, Dr. Monica Valencia, who is a local elementary school vice principal.