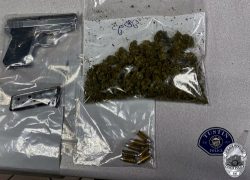 During the investigation, the officers also learned that the driver was a convicted felon and a narcotics registrant.

When the vehicle was searched, the officers found an unregistered loaded handgun and an ounce of marijuana.

The driver was booked into Orange County Jail.