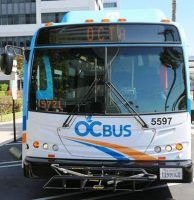 The OCTA’s CEO, Darrell Johnson, responded in writing to Santa Ana Mayor Miguel Pulido regarding the Proposed 2016 Bus Service Plan, on January 8. The OCTA is considering getting rid of the bus lines 51, 145, and 76 that serve the people of Santa Ana.

The problem that the OCTA is contending with is that bus ridership has gone down quite a bit. That may be due in part to the large number of immigrants who have left Santa Ana, heading to other cities and states and even returning to Latin America.

The goal of the Proposed 2016 Bus Service Plan is to reverse a long trend of declining ridership and provide a more efficient and cost-effective transit system that is funded with limited taxpayer dollars. Since 2008, the Orange County Transportation Authority (OCTA) has lost more than 20 million passengers, a reduction of 30 percent. The City of Santa Ana bus ridership is down approximately 8 percent over the last several years. OCTA has undertaken a number of efforts to understand and reverse this trend over the past year that has relied heavily on talking to current and past riders. That feedback as well as a comprehensive Transit System Study was used to develop the draft plan. Since we do not have new revenues, the plan relies on reallocation of service from lower performing routes to higher performing routes.

OCTA is also proposing several improvements in service within the City which will be of benefit to many residents and businesses. We are proposing to increase the frequency on Route 72 on Warner Ave from 45 minutes to 30 minutes during weekday peak periods and from 60 minutes to 30 minutes during the midday. We are also proposing the implementation of two new Bravol routes on Beach Boulevard and Westminster Ave./17th St. Route 560 on 17th St. Would improve the frequency and speed of service at major stops along this corridor.

As part of the plan, OCTA is proposing to eliminate Routes 51 and 145 which provide service in Santa Ana and account for 2.3 percent of the boarding within the City. One of the reasons for choosing these routes is that they are surrounded by high-frequency transit routes. Riders from Routes 51 & 145 would still have access to a robust transit network with % mile of their current stops. This includes Routes 47, 53, 55, 57, and 64 which all have a peak frequency of 15 minutes or better. OCTA is not proposing to reduce service on these routes even though the ridership is down over the past several years.

In addition, as you are aware, OCTA is actively working to design and construct the OC Street Car which will be the first fixed rail transit system in Orange County and will serve Santa Ana with high-frequency rail transit service from the Santa Ana Transit Center, 4″ street, the Civic Center and connecting to Harbor Boulevard, which currently has the highest frequency and ridership of any route in the OCTA system.

Please feel free to contact me at any time should you have any questions.