Area residents heard noises outside and then discovered that a 10-year-old female miniature pinscher mix had been killed in a possible fight with a coyote, according to Orange County Animal Care. END_OF_DOCUMENT_TOKEN_TO_BE_REPLACED 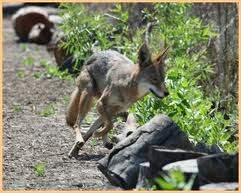 A Coyote Night presentation will be held at the Santiago Creek and Wildlife and Watershed Center, located at the Santiago Park Nature Reserve, on Friday 7/18/14 at 6:00 pm, at 600 E. Memory Lane., in Santa Ana.