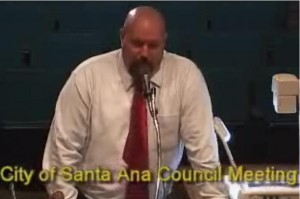 Gordon tried to run against Tinajero in 2010, when a Vietnamese American and a Latina also filed to run against Tinajero.  There was evidence that appeared to indicate that Gordon was involved in their campaigns, which made sense as this would have been the ultimate vote split.  But the Santa Ana City Clerk tossed out Gordon’s signatures, including his own, and he waited too long to turn in his signatures, so there wasn’t time to get more. END_OF_DOCUMENT_TOKEN_TO_BE_REPLACED

There were five cops at the scene before long and they were all very intimidating as you will see in the video above.  The cameraman and his friends were ultimately detained for “suspicious activity” and searched, over their objections. END_OF_DOCUMENT_TOKEN_TO_BE_REPLACED