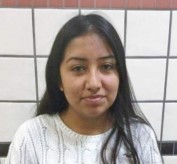 (February 10, 2016) – Santa Ana Unified School District celebrates Noeli Zarate, a senior at Santa Ana High School, for earning a perfect score on the AP Spanish Language and Culture Exam in May 2015. This distinction is so superior that it falls into a select category in which Noeli is 1 in 55 students in the world to earn every point possible during this testing period. Furthermore, out of approximately 4.5 million AP Exams taken by 2.5 million U.S. public high schools in 2015, she is 1 in 322 students to earn every point possible, a rare accomplishment.

“What a great role model for every student, male or female, at Santa Ana High School. Noeli embodies the amazing potential that exists in all students if they just begin to look at themselves differently. More importantly, even though Noeli is soft spoken, her mere presence gives others permission to do the same,” said Jeff Bishop, principal of Santa Ana High School.

AP Exams are based on a 5-point scale, where a 5 is equivalent to a grade of A in the corresponding college course. “AP courses and exams are college-level, and require hard work and focus on the part of students and their teachers,” said Trevor Packer, senior vice president of AP and instruction at the College Board. “On behalf of the College Board, we congratulate the students and community members who make challenging coursework and focused practice a priority, and who motivate and encourage all students to capture their academic potential.

Zarate is a native of Guanajuato, Mexico. Modest about her excellent performance, she said, “I was surprised by the results considering the complexity of the exam. I honestly did not study much because you can’t really prepare for it.” Zarate currently holds a GPA of 4.6. She has yet to make her selection on which college she plans to attend; however, wherever she plans to attend, she says that she will study very hard.

If you are interested in covering this story about a brilliant, inspiring young lady, please contact Deidra Powell, Chief Communications Officer of the Santa Ana Unified School District at (714) 673-4995 or deidra.powell@sausd.us.

One thought on “Santa Ana H.S. student earns a perfect score on the AP Spanish language and culture exam”