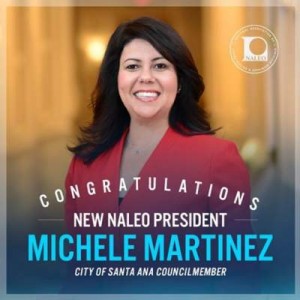 The National Association of Latino Elected and Appointed Officials (NALEO) elected Santa Ana Councilmember Michele Martinez as its new President following the 32nd NALEO Annual Conference which took place this past weekend in Las Vegas. NALEO is the non-partisan leadership organization of the nation’s more than 6,000 Latino elected and appointed officials.

Elected to serve a one-year term, Martinez commented, “I am humbled and honored that my colleagues have chosen me to lead this organization during such an exciting and historic time for our community. I am ready to do my part to continue to help our nation’s Latino elected officials develop the leadership and governance skills they need to be effective advocates for their communities.”

To learn more about NALEO, visit their website at www.naleo.org.