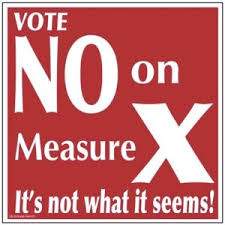 To make matters worse Tinajero’s allies on the SAUSD School Board, John Palacio and Valerie Amezcua, have placed yet another bond measure, Measure I, on the November ballot as well. Measure I will raise our property taxes for the third time and saddle the SAUSD with almost a billion dollars in total bond debt. And higher property taxes mean higher rents on the horizon.

Palacio and Amezcua are up for reelection this year – and like Tinajero they now find themselves in the awkward position of promoting a tax increase while they try to connive the voters into voting for them once again.

Palacio, who fancies himself a political consultant, is, I am told, running the Tinajero campaign as well as his own and that of Roman Reyna, a former City Councilman who moved to Ward 4 this year and is also on the Nov. ballot.

Are there other ways to resolve the City of Santa Ana’s financial woes? Why yes there are:

Measure X is an awful idea. It is no wonder that even the candidates that Tinajero recruited for the Santa Ana City Council are against it. They have left Tinajero holding the tax increase bag…all by himself.