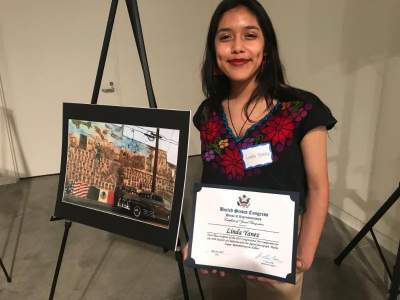 Linda is a 10th grade student who created the work, “Barrio Logan: Remembering the Fallen.” The photograph depicts the commemorative community mural in the Logan neighborhood. Linda and her parents will be honored at the U.S. Capitol Building in Washington D.C. at a ceremony on June 29, 2017 and the work will be hung in a gallery/corridor setting in the Capitol Building along with student artwork from other U.S. Congressional Districts. Congratulations Linda!