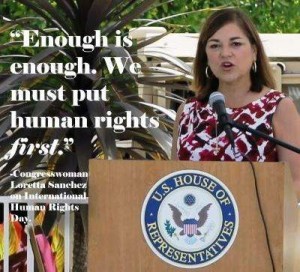 “Every year, International Human Rights Day reminds us of the work that still must be done in the global effort to protect human rights. As we get closer to a vote on the Trans-Pacific Partnership (TPP), we must acknowledge the egregious human rights violations that continue to be committed by the Vietnamese government. As the founder and co-chair of the Congressional Caucus on Vietnam, I have witnessed Vietnam make empty promise after empty promise that it will improve its human rights record. Enough is enough; we must put human rights before economic gain.

“And here at home, especially in light of yesterday’s CIA torture report, we must recommit ourselves to upholding our values and the right to human dignity for all.”

« Santa Ana immigrant rights activists arrested while protesting at a DUI checkpoint
Arts and Culture Commission to host a Meet and Greet on Dec. 18 »