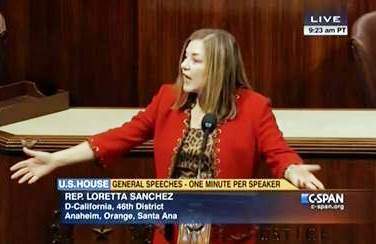 “Today’s vote confirms that Republicans are willing to do anything, including endanger our national security, to score political points through anti-immigrant measures,” said Rep. Sanchez. “They have no shame. No tienen verguenza.”

Yesterday, Rep. Sanchez spoke on the House floor in opposition to the measure. The image links to a video of her speech and the transcript follows.

“The Republican majority has decided they’re willing to shut down the agency that detects, deters and responds to threats to our Homeland. With an elevated terror-alert status and in light of the devastating attacks in Paris, they must have a good reason, right? Wrong.

“There is a phrase in Spanish that describes this behavior: “no tienen verguenza.” They have no shame.

Kim Nguyen endorsed for Supervisor by the Assn. of O.C. Deputy Sheriffs

One thought on “Rep. Sanchez bashes House Republicans over their anti-immigrant vote”