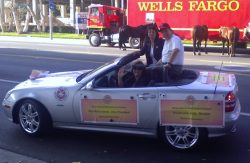 In March of 2007, a year after SAUSD Trustee Audrey Yamagata-Noji was elected to her latest term on the SAUSD School Board, SAUSD administrators got busted for after they created “false class rosters and misused substitute teachers to qualify for state funding earmarked for small classes for elementary students, according to eight teachers, school documents and state officials,” according to the L.A. Times.

At Washington Elementary School, for instance, documents reveal that school officials created a second-grade roster showing students in a class that didn’t exist. The phantom classroom diluted the number of second-graders in existing classrooms — allowing the average class size to fall below 20.5 and giving the district an additional $1,024 per student per year.

A month later the scandal grew even bigger.