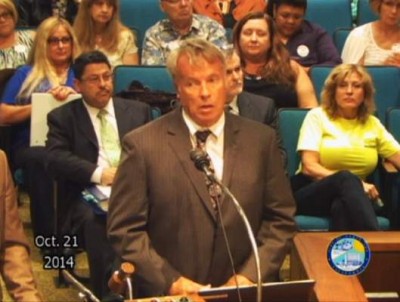 What to do about the proposed Santa Ana Homeless Shelter

Santa Ana Councilman Vince Sarmiento spoke about how badly the County publicized their outreach meeting to residents who live near the site of the proposed Santa Ana Homeless Shelter.

Rob Cook spoke about using the Orange County Building 16 to house the homeless.  That building has been vacant for years but has major asbestos issues. 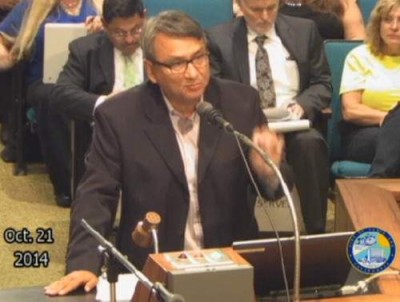 SAUSD Board Member John Palacio showed up to talk about how the school district is not happy about the proposed site of the homeless shelter.  He said that the district supports a moratorium on the approval of the site so that parents can voice their concerns.  He mentioned traffic, safety and overcrowding.

A property owner named Scott Barnard said he did not get a notice and he wondered how the City or the County would even have his email address – as apparently the notices about the aforementioned public meeting were sent electronically.  He found out about the outreach meeting from a tenant.

Steven Monroe, a Property Manager and land owner said that he has been in the city for some 18 years and he suggested that building a homeless shelter would just make things worse for the city. 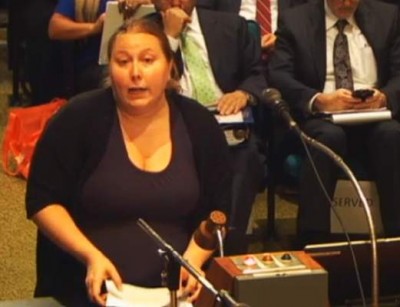 Heather Johnson, from the ACLU’s Dignity for All project, showed up to say that the ACLU opposes the emergency moratorium, saying it was unlawful.  She said it would violate the city’s obligations under SB2 and the city’s onus to provide housing for the homeless.  She said SB2 says shelters can be built despite neighborhood opposition.  She said the Council’s willingness to consider a moratorium presents a threat to public safety.  She said that the use of the local Armory and the Salvation Army have presented no community problems posed by the homeless.

She suggested a resolution that would encourage a “good neighbor” policy, whatever that means. 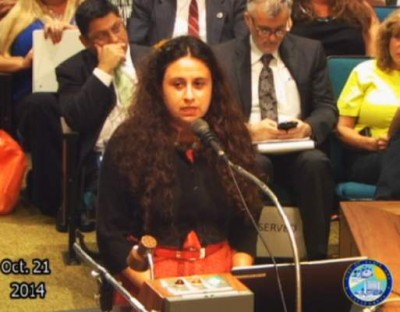 Alicia Rojas, who lives in Huntington Beach, seconded what Johnson said.  She wondered if a moratorium is legal with the building in escrow and she reminded the City Council that they already voted to approve the site in question.

She said that the opposition is stereotyping the homeless and that this is discrimination.  She also suggested a check-in center in Downtown Santa Ana. Then she went off on the Mayor for maintaining decorum at the last City Council meeting. 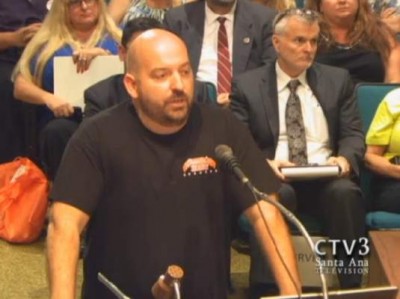 He said that homeless people have been seen having sex right by local schools.  He said has been attacked by homeless people with sticks and knives.  He acknowledged he is not a politician, he is a burger guy but his lease is up and if the homeless shelter goes up he is leaving as they are “bad for business.”

This is a man who helps the local school kids – and he is disgusted at what they have to see with regard to drugged out homeless people.  How, he asked, can we put up a homeless shelter in the middle of four thousand kids. 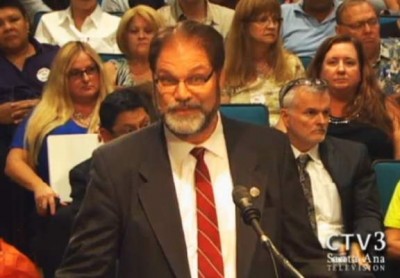 Supervisor John Moorlach said he bought his first home in Santa Ana and that he was in our City Council chambers when the City Council tried to get rid of a local charity that helps the homeless.  He said he gets to live every day the problems with homeless people defecating and making a mess as his office is in Downtown Santa Ana.

Moorlach mentioned the St. Vincent de Paul center in Phoenix, AZ, which has successfully dealt with the homeless problem.

He said that the homeless have been here in Santa Ana for his entire adult life.  He suggested we need to do something.  He recommends that we work together closely with regard to the location on Normandy, and also suggested that the attitude is we have to do it somewhere, but not here.  He requested that we dialogue where that should be. He reminded the City Council about the bus shelter site that has been suggested before.  Councilwoman Michele Martinez liked that idea.

One of the parents who spoke thanked Martinez for originally voting against putting the homeless shelter at the Normandy site and she noted that the next public community meeting about this subject is set for Oct. 28 at Century High School. 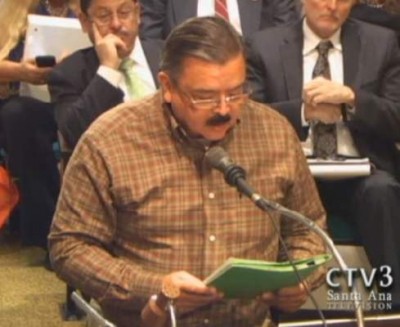 A fellow named Jose who is on the committee for environmental justice that is opposing the homeless shelter presented some 400 signatures of folks opposed to the Normandy site and he mentioned that the Supervisors have not been helpful – in particular he called out Supervisor Janet Nguyen, and said she has effectively turned her back on Santa Ana.

RSCCD Trustee Jose Solorio, who is running for the 34th State Senate District against Nguyen, also showed up and spoke in support of the moratorium.

Sarmiento explained that the City Council approved a zoned area but he said the County did not tell the Council exactly where the site was going to be until July.  He asked the City Council to request interagency communication and coordination and he also asked the them to consider a 45 day moratorium to work with the Supervisors and to engage the homeless community and the neighbors in the community.  Pulido seconded the motion.

Martinez said that when the Council was first looking at this issue and the abandoned OCTA bus shelter was considered the previous city administration immediately “excluded that site.”  She said that the site should have been considered.

Mayor Pro Tem Sal Tinajero said that when looking at the homeless we only look at the ones who cause “the damage.”  He said that these individuals at one time had a home.  He said that those who have lost their homes are in a very difficult decision and that they include folks with mental illness.  Why are we surprised, he said, when these people commit crimes?  He mentioned the sunshine ordinance and admitted that there was a breakdown in communication and said that they should have shared with the supervisors about how we do business in Santa Ana.  He suggested that in the next 45 days we come up with a solution – a place for the homeless to rest their heads knowing that they are safe and can receive services they need. 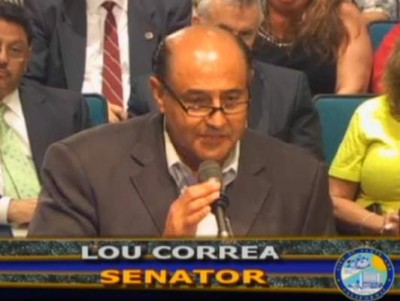 State Senator Lou Correa showed up and said he has been working on mental health issues in Sacramento for over a dozen years. He said when he was a Supervisor he remembers that the City of Santa Ana was going to cite and prohibit the religious vans from feeding the homeless.  He said that he told them this would happen over his dead body.  What happens when you have hungry homeless, he said the outcome is pretty obvious and it is not good.  Correa said he supports the Council in coming up with a 45 day moratorium and said we should let the community express their perspective.  He reminded everyone that his wife was attacked a year and a half ago and the criminal who did it was not homeless but everyone assumed he was.

Correa said how do we fix the problem.  And he reminded the Council that Santa Ana is the seat of County government and he urged everyone to move forward with a solution.

Council Members Angie Amezcua and Roman Reyna said they would vote for the motion too.

Pulido closed by reminding us that we need to look at the rest of the First District including Garden Grove and Westminster and he wondered why we did not look at those cities.  Why he said are we only looking at Santa Ana?  He also noted that Moorlach is leaving the OC Board of Supervisors in 60 days and he hopes his replacement will be as engaged in the issue of the homeless as Moorlach has been. 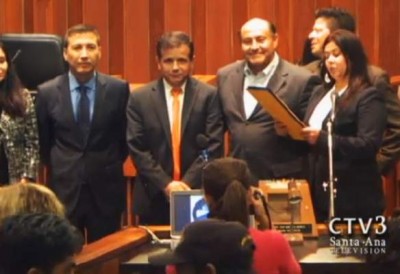 Then a creepy guy interrupted the meeting and demanded to be heard but Pulido reminded him that it was not time for public comments – then he asked Martinez to take over and she made the presentation honoring Correa, who is terming out this year.  His is the State Senate seat that Nguyen and Solorio are fighting over (note that Nguyen was MIA tonight).

So what happened to the FTP ding dongs?

The City of Santa Ana took my advice.  They searched them and kept them outside – where they were provided with a screen to see the meeting and a podium where they could lose their minds in public. 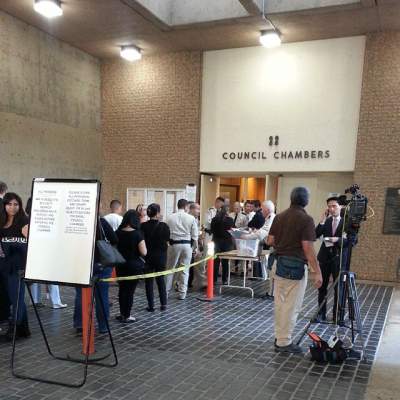 Here is the crowd getting searched. 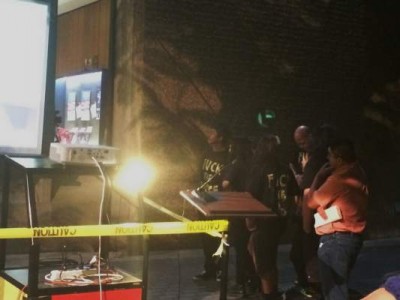 Here is the outdoor screen and a group of FTP protestors including DTSA artist Theo Hirsch.

And here is one more shot of Theo and a friend of his: 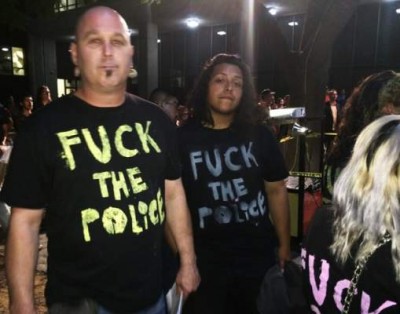 The good news is folks seemed to behave themselves, the world didn’t come to an end, and our City Council conducted a very useful meeting with at least one very important outcome – the moratorium on the Normandy Street Homeless Shelter.

The meeting is still going on by the way but I am wrapping this up.  Click here to see the meeting as it streams online.