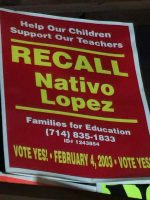 Ironically both Benavides and Tinajero are going to term out in 2018. But getting recalled would ensure that their respective political careers would end prematurely and badly.

It will be difficult for Benavides and Tinajero to defend themselves. Crime has spiraled out of control since they took over the Santa Ana City Council. And while they proudly proclaimed a budget surplus last year they are now having to acknowledge a vast budget deficit in the wake of their awful decision to cancel the ICE contract with the Santa Ana City Jail – a move that ended up costing the City of Santa Ana several million dollars a year in lost revenue.

Benavides and Tinajero also voted recently to move Gerardo Mouet out of the City Manager’s office – sending him back to the Parks and Rec Agency. They have since had to hire an out of town temp City Manager who is going to cost our city a fortune.

If you think these recalls have no chance you are forgetting that Tinajero’s former SAUSD School Board colleague, Nativo Lopez, was recalled a few years ago. Si se puede!